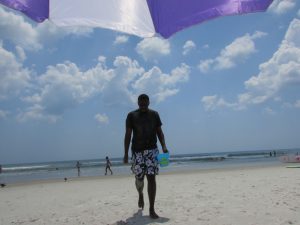 For over 20 years I longed to go to Europe. I spent three years in French class in high school and was determined to one day see the Arc de Triomphe in something other than a movie. I decided to finally stop letting other things take priority over my funds and my time. I made up my mind that in 2014 I was going to see Europe come hell or high water!

Hell and high water did come in the form of a phone call late one night in March. Answering the phone I was greeted by a long pause that struck terror in my heart. The voice on the line was from a police officer. My ex-husband was unable to speak subsequently the officer informed me that my son had been killed that night in an accident.

I was immediately consumed with sorrow. Moreover, I felt like someone had sucked all of the air out of the room.  Hot unending tears streaming down my face reminded me that life is most assuredly not fair. My heart ached with the realization of life's arbitrary ways. In the wake of this tragedy, I had to drive cross country with my other children so that we could say goodbye to my first born son.

2,164 miles to mourn all the plans I had for me and my children. ALL my children, that would now never come to pass. I had run out of time. 2014 beat my butt mercilessly and showed me that it was the boss!  The vacation money I saved went to pay half the cost of my son's funeral expenses. The money didn't buy me a trip down the Champs Élysées but it did buy an Urn to hold the ashes of my beloved son. The realization that " life is short" and "tomorrow is not promised" is now burned into my mind. Consequently, it is this realization that fuels everything I do. I no longer put things off for the theoretical  "one day".

Read More about One of the reasons why I travel: I spent my vacation money on a funeral

We use cookies to ensure that we give you the best experience on our website. If you continue to use this site we will assume that you are happy with it.OK